After reading a discussion on the subject of using modern injector blades in Enders Speed razors I got intrigued and ended up buying on of those razors. Allegedly you can use a modern injector blade and prop it up with a cut down original Enders blade. My first idea was making some sort of 3D printed adapter inspired by those for wedge blades. 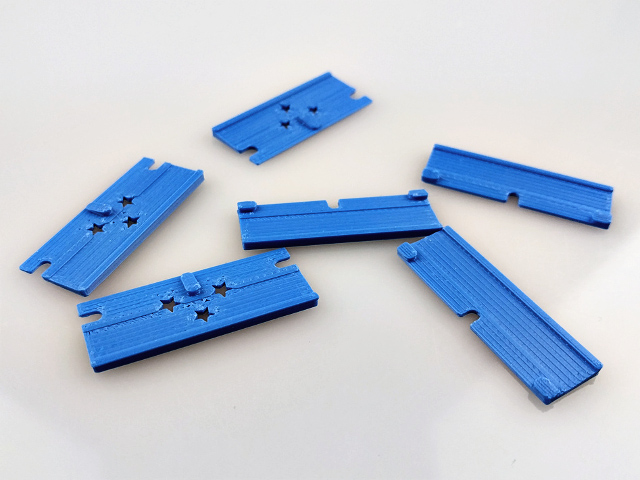 This article will follow my journey from (at the time I'm writing this) not having received the razor yet, to whereever it will lead me. If it leads me anywhere at all. Right now I have no idea if I'll succeed or not.

This article will probably get very technical and detailed—just skip what you don't wat to know.

The Enders Speed razor was developed around 1930. It was sold by the Enders Razor Company. One of main selling points they tried to get across was the fact that this was a “one piece razor”. You didn't have to (and couldn't) take the razor apart to change blades. This was achieved by using special, proprietary blades.

Two patents were filed for the Enders Speed razor, one for the head and blade of the razor and one for the handle.

To give you an idea what those razors look like, here a some images of the razor I just bought on eBay:

Clearly, those blades are proprietary and no longer available today. From the first patent I learn that the tongues on the sides of the blade bend slightly when inserted into the razor and act as a spring to hold the blade in place. Any blade adapter will have to be made from an at least slightly flexible, non-brittle material.

Measuring the blade without having one

I still don't have the actual razor, but I want to get started. I'd like to have at least a rough idea of the dimensions of the blade. I know that people claim that a modern injector blade has approximately the same width as the edge of an Enders blade. An injector blade is about 38mm wide. So I took the second image above, rotated it a bit, cropped to the blade and scaled the image so that the cutting edge is 380 pixels wide (10 pixels per millimetre):

The software I use for image work is GIMP and it allows me to measure distances in pixels which—with the above image—easily translate into millimetres. My preliminary results are:

Those values will change once I have an actual blade, but they are good enough for now to make a…

First 3D model of a blade

Here starts the geeky, technical stuff, but maybe you want to know what approach I'm taking.

My software of choice for 3D design is OpenSCAD. It is free software and available for Linux, Windows and macOS. You describe your models with little computer programs that are then executed to render your 3D models. As a computer programmer this approach appeals to me. There is plenty of other 3D modelling software out there, but OpenSCAD suits me best.

Here is a very simple OpenSCAD ‘program’ that describes the outline of an Enders blade, based on the values read from the blade image. I don't expect you to read this or understand it fully. It's here to give you an idea what those 3D ‘programs’ look like:

This file can be downloaded here. What it does, is to define some variables that represent the dimensions of the blade as guessed from the image. Then it computes some values as measured from the centre-line of the blade. Next, it defines a function that draws the shape of the blade as a polygon (“shape”) and the last line calls that function, thus rendering the shape. The result is the following rendered object:

This pretty much looks like an Enders blade already and it's all I will do until I actually have the razor in my hands.

The Enders has landed, but we have a problem

Actual measurements of an actual blade:

I'm firstly amazed how inaccurate my readings off an image off eBay are, but what really baffles me is the width of the cutting edge: 37.37mm. I just did an actual reading from an injector blade and it is 38.2mm wide. That's a whopping difference of 0.83mm. The gap between the sides of the head at the front is 38.00mm. Any blade in the Enders can't be wider than that. End of. Won't fit. No can do. But people do claim they have used injector blades. Are they not all the same width? It turns out they aren't. While a standard injector blade is supposed to be 1.5 inches or 38.1mm wide, Schick Proline B-20 blades seem to be 37.95mm wide. That is just under the magic 38.00mm required by the Enders. It's a close call, but they seem to fit. I have something to work with. Luckily, I have one magazine of Proline B-20 blades.

I put both a Proline B-20 and a Personna injector blade on a flatbed scanner and took an image at a resolution of 4800 dpi. Then I measured the length in pixels of lines across each blade:

Knowing how many pixels there are per millimetre, I could then calculate how wide each blade is. 37.96mm for the Proline and 38.10mm for the Personna. There is not much wiggle room, but the Proline blade does actually go into the Enders razor. Panic over.

Using high resolution images from a flatbed scanner seems to give good results when measuring blades. You don't get distortions due to camera angles. I'll do the same with and Enders blade now to get the best possible measurements.

Now I have pretty reliable values for the dimensions of an Enders blade:

That went well, so we'll get some more measurements of the Proline B-20 blade:

That should be enough to make 3D models of both blades involved.

How thick can the blade adapter be?

I was concerned that a blade adapter for the Enders needs to be very thin to fit the razor. This could make 3D printing of an adapter tricky. However, the entire main part of the blade can be pretty much as thick as you like. It doesn't slot into anything, it doesn't need to go through some gap and it's entirely unsupported from below. It's only held in place by the tongues being bent upwards and acting as a spring, pulling the main blade upwards against the underside of the cap. What a brilliant idea. The only limiting factor therefore, is the gap through which the tongue goes while being bent upwards. While looking at the razor and wondering how large that gap is, I wondered how I should measure that gap and couldn't see any reason not to use the flatbed scanner again:

The gap for the tongue is wide. That's good news. I don't need to make the tongues ultra-thin.

3D model of both blades

In order to make an adapter I need models of both blades. The Enders blade I modelled above was straight forward. Straight lines, no curves, no holes. The Proline blade is a bit more complicated. It still wasn't too hard to make a model. I'll spare you the details of the program (it has exploded to 183 lines of code), but you can download the second version here, if you want to have a look. I then generated an image of a Proline blade sitting on top and at the front of an Enders blade:

Next I need to adapt the model of the Enders blade to server as a blade adapter.

The first 3D model of a blade adapter

Now is probably a good time to investigate the best material to have those printed with. I so want this stamped out of sheet metal, but that's probably not an option.

OpenSCAD can generate animations of your designs. I couldn't resist:

Choice of material for the adapter

Although I'd love to have a blade adapter stamped from sheet metal, 3D printing in some kind of plastic will have to do for now. The tongues need to be flexible enough to act as springs for the main body of the blade adapter, just like the tongues of the original Enders blade. I checked some other blade adapters I've had printed before and they seem to be slightly bendy. I checked my old orders and they were made from a material called “PLA”. PLA it is then for the first prototype. That was an easy decision. I've just ordered 5 adapters for just over £5/$7 delivered. Not much will happen until they arrive.

While waiting for the prototypes I have ordered, I came up with the following modification, that would make it easier to see if the the pegs have properly engaged with the Proline blade. Basically, the main body of the adapter is cut back further, so that the pegs extend forward from the edge.

This might be a solution for a non-existing problem, but at least I'm prepared. I'm tempted to order some of those as well, but I'll wait for the first batch to arrive in case other modifications are required. I can't be sure that all my measurements are correct until I've tried an actual adapter.

While still waiting for the prototypes I used my trusty flatbed scanner to take an image of the blade exposure of the original Enders blade, so I can later compare it to that achieved with blade adapters.

The easiest distance to measure is that between the front of the top cap and the edge of blade. In this case I have measured . Using a blade adapter I hope to relaibly get close to that value.

Four days after placing the order for my prototype adapters, I have been informed that the manufacturer is “not responding” to my order. I was offered the option to pick another manufacturer and I picked one I have used before. They are $1.30 more expensive. That'll teach me not to pick the cheapest one (what was I thinking?), but the one I already know, the one with the highest ratings. Within minutes they sent me this screenshot:

Nice. I've lost four days, but I'm back on track. A couple of days later I received the following image:

They have been printed and will be shipped soon.

The adapters just didn't work at all. There was just no way to line up the pins with the holes in the injector blades and insert the combination into the razor head without them coming apart again. I even tried to superglue a blade to one of the adapters, but the tolerances are so tight that the only result was superglue on my fingertips for two days. I'm not even convinced that the “potential modification” I came up with above will fix the issue.
There followed a long period of inactivity…